In August 1999, Selling Power magazine ran an article featuring our firm and the work we’ve done helping clients, like IBM, build new sales channels and increase sales productivity. A few months later, we received a call from the head of a division within NCR asking us to meet with them to see if we could help them with something similar.

The senior executive with whom we met said if we could help IBM we should be able to do this project for them. Excited about the prospect of helping them build a new channel, we agreed and they laid out the challenge:

After collecting the previous project work we quickly went to work on assessing what had gone wrong. It took us a while, but we finally discovered “IT”. Once found, this insight became the key to unlocking success.

Almost ten years later I’ve seen this scenario play out over and over in B2B companies. This is what we discovered. 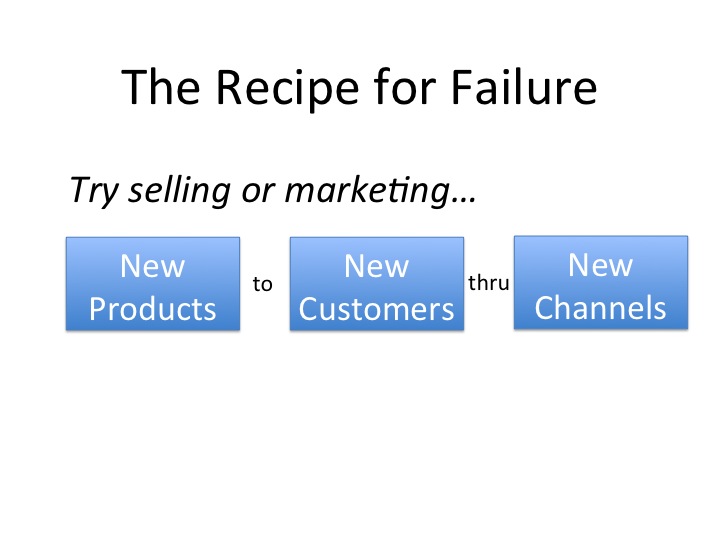 The secret recipe for failure

This simple equation is just as true today as it was a decade ago when we discovered it. Oh, you may find one or two exceptions but the majority of the time when we do post mordem on failed programs you find this equation is at the heart of the problem. When combined with a few related pieces, like a lack of time in the market and/or funding, the initiative is doomed. The degree of “newness” in these three areas will directly impact the likelihood of success or failure.

We got the NCR teleaccount program up and running in 41 days. We transitioned existing field account managers to TeleAccount managers and built their territories around their customers. We then began to backfill them with new lower cost resources over time. You’ll be happy to now that the manager of the group that tried to sabotage the effort got fired.

The program hit our first year sales targets, reduced the expense to revenue ratio from 13% to 6% and grew sales productivity from $1.7M to $3.1M per rep. As a result, NCR then built a full-scale tele channel with close to 80 reps.

Then they killed it.  It’s a long story but the bottom line was the company has a strong field sales tradition and culture.  Mark Hurd, now CEO of HP, became the CEO of NCR, and decided to shut the channel down, redirecting the resources to the field.

Remember my comment about competing for resources. Mark’s an operations guy and a fan of face to face selling. Culture runs deep, and can also kill channels and programs. Maybe I should update the “recipe” to include the forth “New”…new leadership.

As a result, the two-year journey has paid off with the site being named #1 in the industry. Even more importantly, their key priority areas (site search, attorney profiles, etc.) were ranked in the outstanding category. Proving that excellence is a journey not just a destination.
CASE STUDY

Carbon Design, represented side by side with, a global architecture powerhouse, a world-class designer, and the project principal: the innovative green-tech engineering firm, S2E Technologies Inc. Under S2E’s leadership, these firms are inventing a new consumer category – one that integrates bold new ideas about housing and transportation – and radically resets the carbon footprint of both at the same time.