One Man’s Quest for a Social Media ROI

Everybody knows – or thinks they know intuitively – that social elements add value to marketing.  The question is how?

Like anything in business, it comes down to return on investment. Social media is not a strategy and it’s not an end in itself. Unless your business objective (and I’d check with your shareholders on this) is only about gaining page views and follows, marketers need to understand how social adds value to everything else in your toolkit.

So how do you find the “sweetspot” for developing an ROI for social media?  Well, start by viewing the tools at their most basic level, as vehicles for sharing and; photo’s, thoughts, content, etc.  Consider them “levers” for improving the performance of known activities that have produced a ROI.

Five years ago, we assessed the effectiveness of demand generation campaigns for a client.  Because the firm was in the hi-tech industry they had a heavily reliance on content marketing for their campaigns.  They spent months designing and building them, and hundreds of thousands of dollars in execution only to see diminishing results.

The audit revealed that their campaign effectiveness (related to lead production) lasted roughly 36 hours after launch (see below).  Meaning that the majority of the leads were being created within the first three days of launch, regardless of how long they left the campaign in the market (btw – they are not alone). 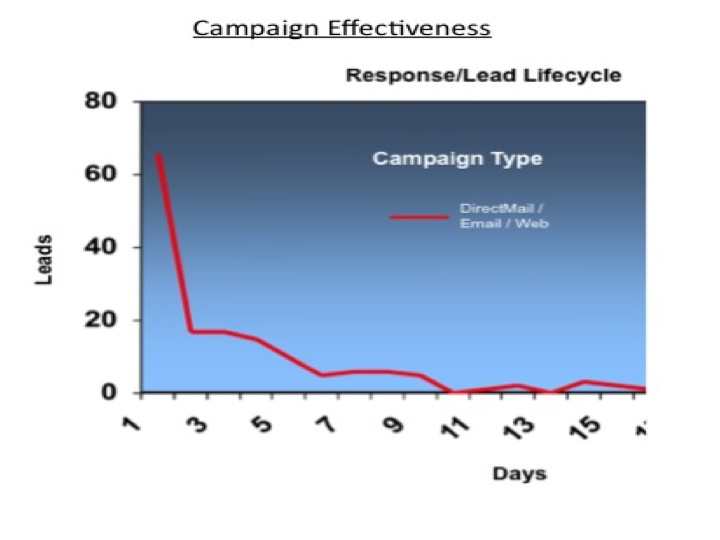 Today, social media has the potential to create a long tail, extending the life of expensive campaigns, ultimately improving ROI, and along the way creating and deepening the relationship with the audience.

I’ll use myself as an example: A blog post of entitled The End of Blogs (and Websites) as We Know Them ran recently in on Forbes. It received no special promotion; in fact, you could say the deck was stacked against it.  Posted on a Friday, the slowest traffic day of the workweek, at midnight (EST) when most of the blog readers at home or are in bed.  By prime blog viewing time (10 am) it had almost dipped below the fold.

Social took over. Without any additional investment to promote the post, social sharing accelerated and extended the life of the post, even as it fell off the first, second and third page of the site.  Readers engaged and went from passive viewers to active promoters.

Readers were tweeting their own thoughts and comments about their insights, not just retweeting the post title.  They placed in into Linkedin groups adding their comments on the impact of the technology (the topic of the post) to their particular area of interest or role.  They were actively engaging in sharing their “discover” with others. 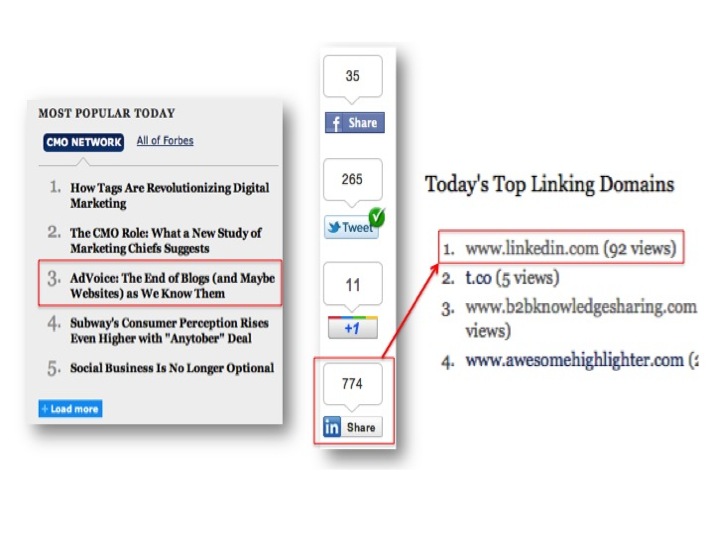 That is the power and the value of social media for content marketing.

The post no longer needed to be pushed because it was being endorsed, and in some ways validated, by readers — the most trusted source of information.

The potential of social media is intriguing, but to determine its true value companies will need to experiment.  Using social media to support your content marketing efforts is a prudent choice, but keep this in mind: It will only be effective if the audience/community finds value in the content and part of that value is defined by those who pass it along.